From Lucas Chess Wiki
Jump to navigation Jump to search

This is one of the most useful training features of Lucas Chess if you want to - you have to find the best move for given positions (or a move that is within a threshold of the best move that you can set). And these positions can be generated from the mistakes in your own games - a great way to improve your chess. The feature is located under Train / Tactics in the main menu - see below on how to generate your own trainings. 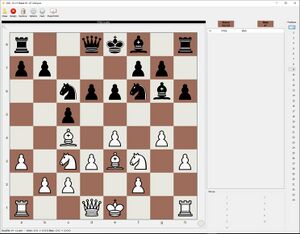 As you keep discovering moves that are close enough to the best engine move, they get uncovered on the right. If you find the best move (or get close enough to it based on your setting in "Options" on the top) all moves are revealed. Depending on how many attempts you took and how good your moves were, you then get a score for this move. 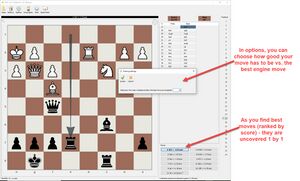 Once you found a best move, all moves ranked by strength are revealed

How do you create your own trainings?

You might be familiar with the feature 'learn from your mistakes' on Lichess. However, this feature is usually limited to only one game. In Lucas Chess, you you can create a database with your own games. You can then either analyse a single game or use the great feature called mass analysis which lets you analyse a large number of games with an engine.

Under "wrong moves" you can generate your own trainings based on your mistakes: 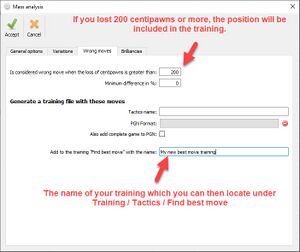 Generating your own tactics trainings from mistakes is an invaluable tool

Make sure to select your user username on the "General options" tab under "Only player moves". Otherwise you get training moves for both sides of the game which would not be very relevant for you.

Once the analysis is completed, you are able to find your new training under Train / Tactics / Find best move